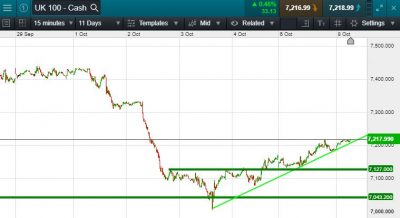 FTSE 100 called to open +20 points at 7216; Calls for a positive open show further evidence of market resistance after Donald Trump’s administration overnight put eight Chinese tech firms on a blacklist, accusing them of being implicated in human rights violations against Muslim minorities in Xinjiang province. This latest move casts a cloud over trade talks this week scheduled for Thursday & Friday. In Asian trading sessions we saw risk on renter the markets with the Nikkei rising more than 1% during trading and the Hang Seng adding six tenths of a percent. This side of the pond Britain is bracing itself for the potential of Brexit talks collapsing after Jean Claude Juncker yesterday said to meet October 31st deadline a deal would need to be in place by this Friday, this brings into question, if a “worst case scenario” is already priced in? Overnight oil rose to break through the $59 per barrel level, with risk on sentiment far more prevalent it will be little surprise that gold has retraced to $1491.

Diploma announce that its Finance Director Nigel Lingwood will retire in October 2020.

EasyJet stated that FY 2019 profit would come in at the upper end of expectations (£420-430m) with revenues boosted by pilot strikes at rivals British Airways and Ryanair.