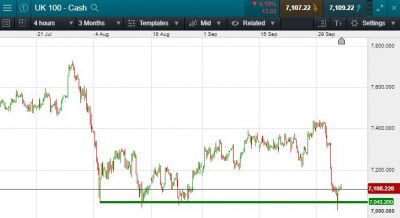 FTSE 100 called to open +33 points at 7109; A more positive start to today’s trading session, FTSE called to open positive for the first time this week.  Following yesterdays bounce in the US (initially selling down in excess of 300 points) following weaker than expected ISM non manufacturing PMI data.  In focus today will be September’s non-farm payrolls data, the consensus is 146,000, but some are already expecting 125,000 following the disappointing ADP report. Oil prices rallied slightly overnight to settle just shy of $58.5 per barrel, as gold continued to move upwards to $1510.

AstraZenca announced today that the FDA has approved the self administration of Fasenra in a pre-filed, single-use auto-injector.

BP announce that Group Chief Executive Bob Dudley will retire in March 2020, and will be succeeded by Bernard Looney.

Meggitt has been awarded a $48m agreement for supply of Aerial Weapons Scoring Systems to the US Army.