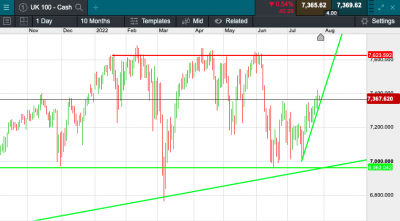 The UK 100 is called to open +36 points this morning at 7383.  The UK 100 looks set to continue its green streak this morning.  Opening nearly 2% higher than the UK blue chip index began the week.  This comes after U.S. equities rallied on Thursday for the second day in a row even after the latest GDP showed the world largest economy had shrunk for the second successive quarter, as investors looked past recession fears, with the hope that this latest downturn would soon cause the Federal Reserve to end its aggressive hiking campaign.  The Dow Jones jumped 332.04 points, or 1%, to finish at 32,529.63. The blue-chip index added more than 400 points in the previous session. The S&P rose 1.2% to 4,072.43, and the Nasdaq added nearly 1.1% to 12,162.59. All of the major averages are on pace for a winning week as well as their best month of 2022.

Aston Martin reported a bigger loss for the HY, hurt by rising costs and supply chain snarls. They posted a pretax loss of £285.4m for H1, compared with a loss of £90.7m a year earlier.
AstraZeneca topped analyst expectations for Q2 profit and revenue, helped by higher demand for its cancer medicines. They also raised their FY guidance, saying they expect it to rise by a percentage in the low twenties rather than the high teens forecast previously.
Croda reports that their H1 pretax profit came in at £636.5m (2021 £204.1m) as they declare an interim dividend of 47p per share (+8%). They expect FY adjusted pretax profit to be slightly ahead of expectations.
Glencore cuts their FY production outlook for Copper to 510,200 tonnes, being 15% lower than H1 2021.
IAG returned to quarterly profitability for the first time since the outbreak of the COVID-19 pandemic, following a “significant” increase in capacity.
Natwest reported a better than expected profit for H1, as Bank of England rate hikes lifted its finances despite runaway inflation threatening to crunch Britain’s economy. They reported a pretax profit of £2.6bn, ahead of the £2.2bn average of analyst forecasts compiled by the bank.
Rightmove expects “broadly stable” market activity for the rest of the year, after they posted a higher HY profit. Their operating profit came in at £121.3m for H1, compared with £114.9m a year earlier.
Standard Chartered reported that their H1 profit rose 19%, in line with market expectations, as the emerging markets-focused lender benefited from rising interest rates. Their statutory pretax profit increased to £2.8bn in H1, from $2.35bn in the same period a year earlier.