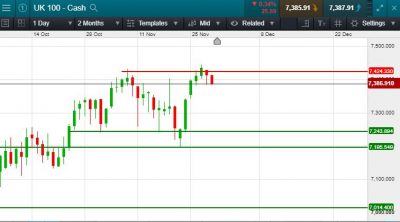 UK 100 called to open -20 points at 7390 this morning; Following a quieter than usual trading session yesterday owing to Thanksgiving holiday in the US volume will be expected to return today. Will investors use Black Friday to search out bargain share prices? Overnight U.K. PM Boris Johnson said he’ll walk away from a U.S. trade deal after Brexit if President Trump insists on keeping the National Health Service on the table. During trade in Asia, the Nikkei closed -118 points & the Hang Seng -556 as protest in Hong Kong call for protests to continue over the weekend. Crude maintained its level above $63.5 to trade at time of writing at $63.6 per barrel. While gold maintained a level just shy of $1460 to trade at $1459 at time of writing.

CVS Group today confirmed both Ben Jacklin and Robin Alfonso have now been appointed Board Directors with immediate effect in their respective roles as Chief Operating Officer and Finance Director.

Future PLC announced that it has issued 686,497 ordinary shares of 15 pence each as part of the consideration for the acquisition of Barcroft Studios, as announced on 15 November 2019.