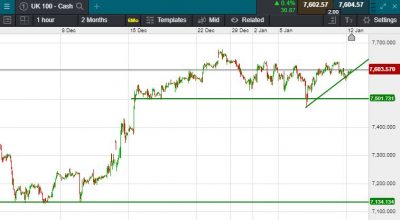 FTSE called to open +20 points at 7607; This on the back of Asian stocks rising on Monday, fueled by optimism on China’s economy and prospects of a signed U.S. trade deal. The yuan strengthened. Shares rose in Seoul and Hong Kong, reversed losses in Shanghai and slipped in Sydney. Japanese markets were closed for a holiday.  The Nikkei opened the week, closing at, 23,850 (+110 points) & the Hang Seng closed at 28,928 (+296 points).  The US closed the week with a slightly negative trading session, the Dow Jones closed at 28,823 (-133 points), The S&P 500 closed at 3,265 (-9 points) & the Nasdaq closed at 9,178 (-24 points) to complete an all red day in the U.S….however, could fresh trade optimism see a turnaround today?  Oil once again dipped slightly over the weekend, trading at $65 per barrel at time of writing. Whilst Gold held at $1553.

Aston Martin are in talks with China’s Geely Automobile Holding about Geely taking a stake in the luxury carmaker.

AstraZeneca announce their drug Lynparza has been granted priority review in the US for 1st-line maintenance treatment with bevacizumab in advanced ovarian cancer.

AstraZeneca also have given an update on the Epanova phase III strength trial, that the independent data monitoring committee has recommended to discontinue the trial as Epanova is unlikely to demonstrate a benefit to patients.

Ferrexpo reported a drop in its annual production, due to weak demand for steel-making products amid sluggish global economic activity. They produced 10.5 million tonnes of pellets for the year ended Dec. 31, 2019, slightly less than the 10.6 million tonnes produced a year earlier.

William Hill announce that their CFO Ruth Prior will step down from her position with immediate effect. They also announced FY results with 2019 operating profit expected to be in the range of £143-148m ahead of market and management expectations.