The decline on the FTSE100 continued for the 4th week in a row, officially sending the index into a bear market correction. This week saw some key moves by central banks across the world, with the Bank of England delivering yet another 15bps rate cut to send interest rates in the UK to a record low at 0.1%. The BoE has also commenced the largest asset purchase program in its history, effectively expanding its quantitative easing program. The British Pound took a massive hit this week, diving to 1985 lows before recovering slightly after yesterday’s rate cut. However, it is trading lower this Friday as it maintains its bearish bias. The BoE has also suspended the annual stress tests for banks in 2020.

Trade negotiations between the EU and UK were suspended because of the coronavirus outbreak, which now has Europe as the epicenter of the global spread. The virus has now been reported in more than 100 countries, and case counts in the UK are rising.

However, Friday has seen the FTSE100 up with a slight gain of 0.7% as at the time of writing due to a weaker pound, propped up by shares of British American Tobacco (BAT) on the day. However, this week’s double-digit gainers are comprised of the following stocks:

It is not entirely surprising to see stocks such as Just Eat Takeaway and Reckitt Benckiser in the gainers’ list. Concerned citizens who do not want to get caught out by any expected lockdowns in the UK are stocking up on essentials such as food and medications, and this is driving sales for companies involved in these sectors.

However, some companies continue to suffer due to their direct exposure to the negative economic impact of the coronavirus. Airlines and cruise companies continue to see their stocks being battered on the FTSE100. Luxury brands are also not spared. At least 35 companies have seen their share prices eroded by double-digit losses so far this week. The top losers for the week are:

The weekly chart reveals that the FTSE100 continued to blow through last week’s identified support areas. However, it was able to find some support at the 4938.6 price level and bounced from there as a result of the BoE’s latest interest rate cut. 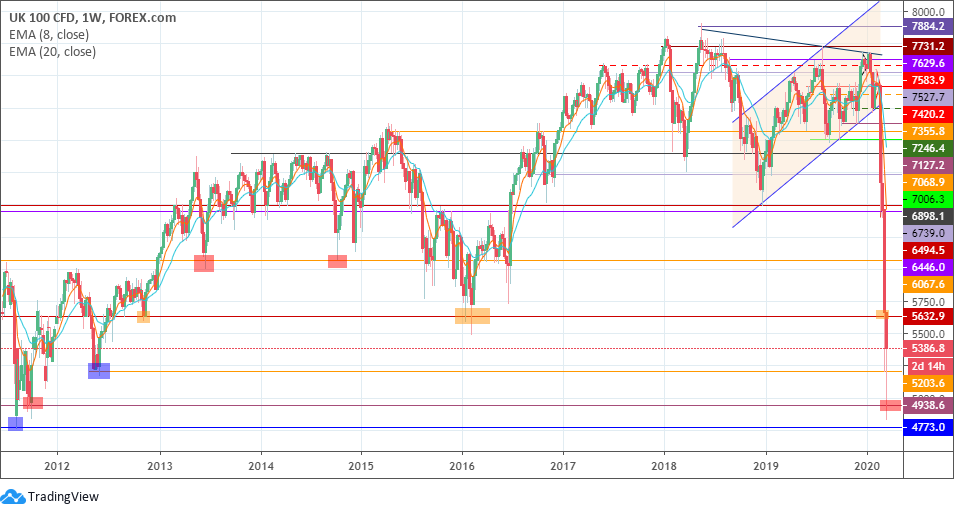 The bounce was able to send the FTSE100 above the 5203.6 price level, and is taking it gradually towards the next identified resistance at 5632.9. However, the latest move requires further upside momentum on the FTSE100 to be actualized.

The price action on the daily chart paints the picture of this week’s price action in clearer light. The biggest daily drop in price occurred on Monday, and price action from then on has been more of a choppy one with alternating daily gains and losses. Today’s daily candle has been able to cross back above the 5203.6 price level, which acted as support to price action of March 12 and 13, but was breached on Monday March 16. 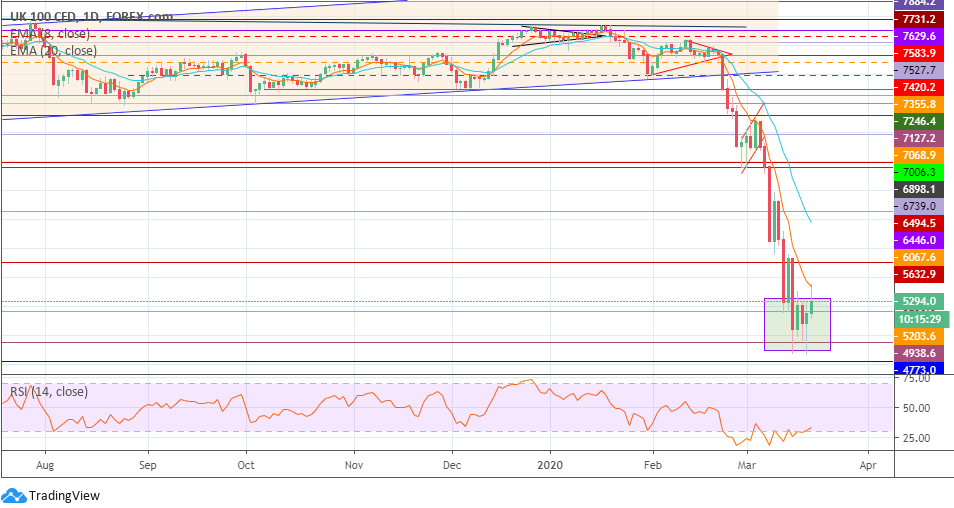 So far, the reaction of the FTSE100 to the BoE’s move has been positive. However, we would need to see the impact on the FTSE100 heading into the 2nd quarter of 2020. If the daily candle is able to hold its own above 5203.6, and the candle of Monday March 23 is able to close above this price level, the confirmation of a breakout from this price level would be complete. Price would now be able to target the 5632.9 resistance level. Further recovery opens the door towards 6067.6 (the two shoulders in the head and shoulders pattern of 2016 seen on the weekly chart) with 6446.0 (the neckline) remaining relevant as a further resistance in the scheme of things.

The coronavirus outbreak, especially the local situation in the UK, could continue to dominate the market fundamentals. Expect a lot of dynamism in price movements as the situation evolves.

A break of 5203.6 could usher in a period of price recovery on the FTSE100, even if it is only a temporary reprieve.

A breakdown of 4938.6 opens the door for further bearish action on the FTSE100.