The FTSE 100 has had probably the best week in nearly 4 months as it surged beyond the 7584 price level; the highest it has been since the end of July. This is coming from optimism of the new Brexit plan that was outlined by the UK PM Boris Johnson and the Queen of England.

Following the election victory of the Conservative party and their assumption of the majority in the House of Commons, the party leader and UK Prime Minister Boris Johnson indicated via his spokesman that he would be introducing an amendment to the Brexit Withdrawal Agreement. This amendment would seek to block any extensions of the Brexit negotiations and final exit beyond December 2020.

This stirred up massive gains for the FTSE 100, which also benefitted from a spillover effect from the election victory of the Conservative Party.

The top gainers for the week are led by Scottish Mortgage Investment Trust, which is currently up by 8.03%. Other top gainers on the FTSE 100 include:

The biggest loser on the FTSE 100 this week is fertility treatment provider NMC Health, which saw a massive 46.22% shed off its stock price this week after a damning report by Muddy Waters, a short-selling research group. This group released a report on Dec 17 in which it claimed to have “serious doubts” about the financial position of NMC Health. The report even went as far as suggesting that the cash balances of the company appeared “too good to be true” when compared to its peers in the same business. The report triggered a massive selloff as panicked investors dumped the stock in droves.

Other top losers on the FTSE 100 this week include:

This week’s surge on the FTSE 100 has given the weekly chart of the UK top index a new look. Spurred on by the bullish end to the previous week, the FTSE 100’s weekly candle has broken through the 7527.7 resistance line, and barring any last-minute selloffs before the weekend, looks good to have exceeded the 3% penetration close threshold to confirm the upside break.

Price is now testing the minor resistance at 7587.0 (previous highs of May 29, 2017 and July 22, 2019). We also see a cluster of previous weekly lows between May and August 2018 at this price level, which will act in role reversal to attempt to resist further upside. 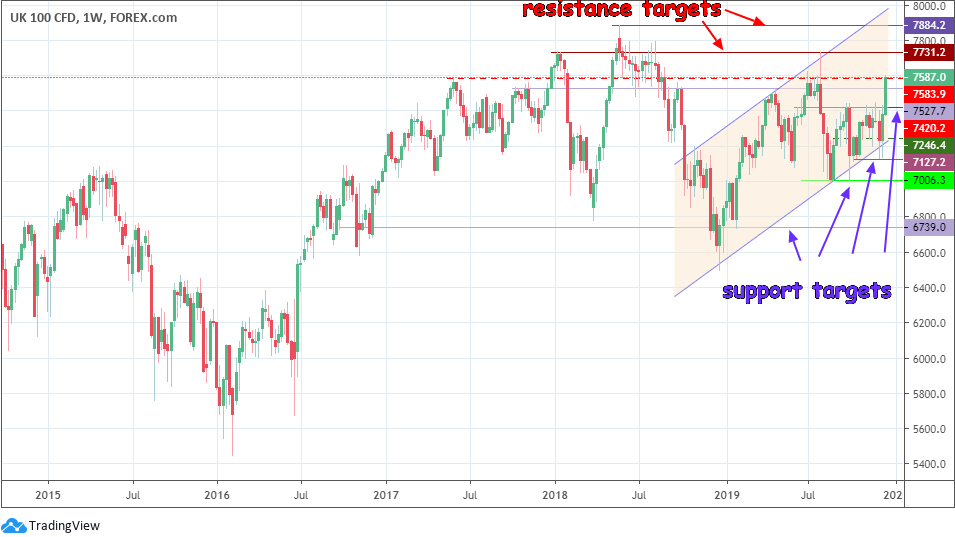 The daily chart shows the price levels of support and resistance more clearly. This is the chart on which traders of the FTSE 100 can trade on. 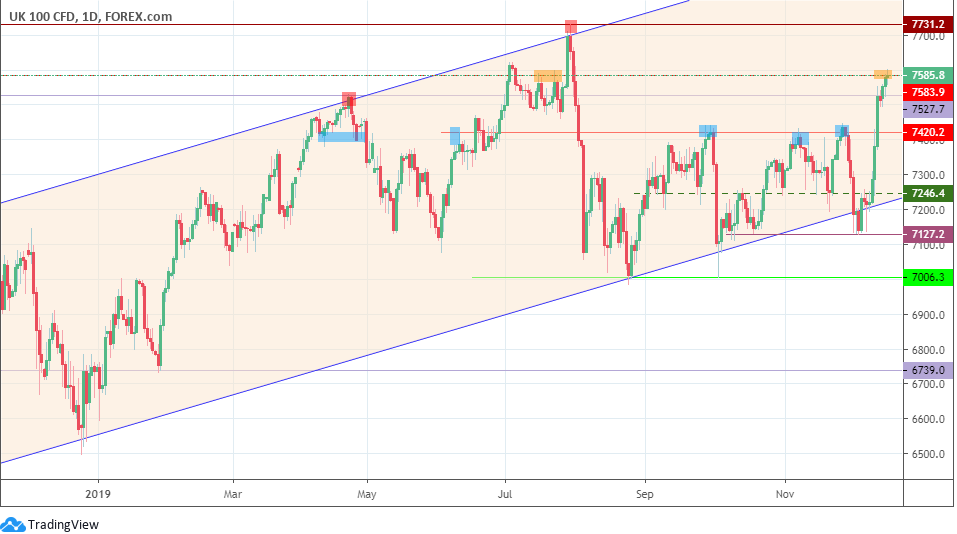 There must be two successive daily candle closes above the 7587 resistance line, or a 3% penetration close above this price by the weekly candle to confirm further continuation towards 7731.2. This move would also confirm the breakout above 7527.7. Above this level, further resistance will be seen at 7884.2 (May 21 2018 high), which is also where the channel’s return line could come under challenge.

On the flip side, a price rejection at the present price level opens the door for a pullback move towards 7527.7. Below this area, 7420.2 comes into focus once again.