Market action for the UK 100 this week has been dominated by massive “risk-off” trading. Tepid manufacturing PMI data from China triggered the risk-off sentiment, which kicked into full swing when the US ISM Manufacturing PMI data gravely disappointed market expectations. A global sell-off in the stock markets as well as risky commodities followed, while safe haven assets such as the Japanese Yen, gold and the Swiss Franc benefited.

Soft ISM Non-Manufacturing PMI data as well as strengthening of the Pound as a result of new Brexit proposals from the UK Prime Minister combined to hand the UK 100 a steep drop in value on Thursday. The UK 100 index futures was trading 317 points lower from Monday’s open as at the time of writing. The index was down by 432 points for the week at a point, but it recovered some lost ground in late afternoon trading.

Among the top losers was fashion retailer Ted Baker, whose shares plummeted 35.6% after reported a half-year loss of £23m. Imperial Brands shares were also in the green briefly following the resignation of its out-of-favour CEO Alison Cooper, but closed lower by 28p. J Sainsbury and Rolls Royce fell 2.85% and 2.89% on the day. BAT, Kingfisher and the Bentley Group also joined the list of losers in a very rough day for companies on the UK 100 .

This week’s price action is in keeping with the outlook for the UK 100 as described in last three weeks. On the long-term monthly chart, the 2019 highs are still unchallenged. The last two highs on the chart (May 2018 and July 2019) are lower highs, indicating a stall in the long-term uptrend.

This set the tone for the medium-term outlook, seen on the weekly chart. Here, we see a rising channel within which price activity also formed a rising wedge. The wedge pattern has now been completed by the expected downside move. This occurred in a typical break -> pullback -> resolution fashion, in the expected direction.

Having completed the measured move to the 7051.7 price level, the weekly price candle bounced neatly off the channel’s trendline. Horizontal support is also formed at this area by previous lows of the weeks that ended February 26 and March 5 last year, as well as February 25 2019. 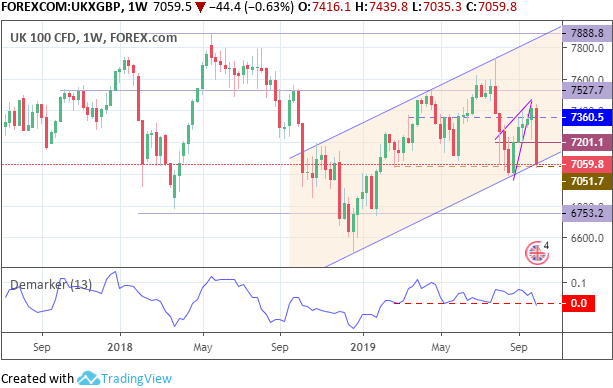 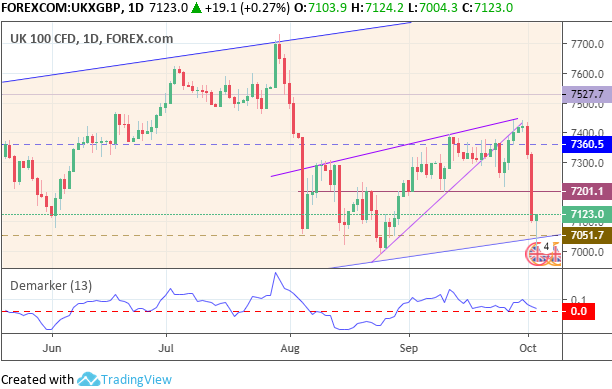 The DeMarker oscillator is yet to break the horizontal trendline at the 0.0 area. It is therefore at a neutral standpoint: neither overbought nor oversold.

The natural price progression in a channel is for price to move from one border to the other until a break occurs. However, the medium-term and near-term views show that many roadblocks exist along the way.

However, price may also reattempt the downside break of the rising channel. In this instance, we need to see continued risk-off action in the market, which could result from the October 4 Non-farm Payrolls report or from GBP-positive Brexit headlines. The Q3 earnings season is also not far off and disappointing earnings from the big companies could be the trigger for this break.

Bears would hope for a rejection of any pullback to 7201.1 which opens the door for another run towards 7051.7 and possibly a break below the channel.