Official data on Friday showed second-quarter GDP contracting by 0.2%. This means the British economy shrank for the first time since 2012. Almost all analysts had predicted GDP to go down from the first quarter’s 0.5% growth, but nobody expected to see the economy contracting. Most analysts were expecting flat line growth as the worst-case scenario.

What caused the performance to be below the forecast? The primary reason is the slowdown in stockpiling activity by the companies in the wake of Brexit deadline extension in March. In addition, increasing Brexit uncertainty in the backdrop of slowing global econom 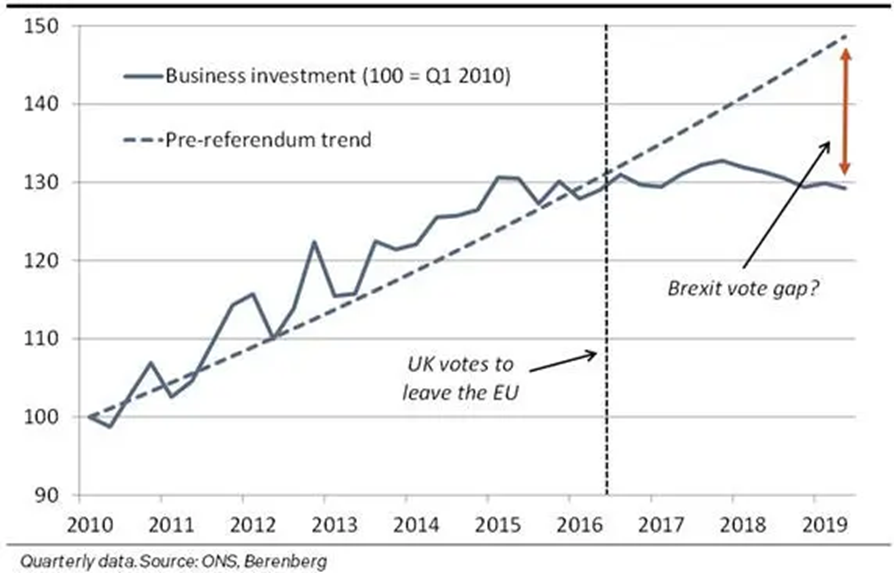 ic growth contributed to the volatility.

Due to the slow-down in hoarding by the companies, manufacturing output fell 2.3%, driving the production sector to contract by 1.4%. Inventories that used to contribute positively to GDP growth caused the 2.24% subtraction in this quarter.

Output in financial and insurance services fell by 0.2%, keeping intact the consistent downward decline in this sector since 2017.

The only positive sector to add to the GDP data was the output of the services sector that continued to expand. However, the growth rate in this sector also fell to the slowest in three years, decreasing by 0.1% compared to the previous figures. Thus, the contribution of this sector to the GDP growth rate was small.

Business investment, having stalled since the Brexit vote in June 2016, contracted further by 0.5%. Construction sector growth decreased by 1.3% compared to the previous quarter.

Household spending, with the help of low unemployment rate and strong wage growth, performed well and expanded by 0.5% on top of the previous quarter. Strong consumer spending is keeping the economy buoyant, but if underlying growth remains stagnant, the fear of recession looms large.

From this data, it’s clear that whatever the outcome is on October 31, the government has to provide a significant stimulus to business leaders to boost investment and productivity growth in the UK.

If the UK’s economy undergoes further contraction in the next quarter, that is, by the end of September, the UK economy will be in a technical recession. However, this may not be as likely as feared. In the wake of looming Brexit deadline and that too with a strong possibility of no-deal Brexit, we are likely to see a very significant boost in the stockpiling activities by companies. Consumer spending is expected to be strongly supported by solid wage increases and low unemployment. The government is also expected to announce its support measures in case of a no-deal Brexit.

The BOE expected no growth in this quarter in its last week’s inflation report. But these GDP figures bring an increased likelihood of the BOE cutting rates as its next move. That, too, will provide a boost for the UK economy.