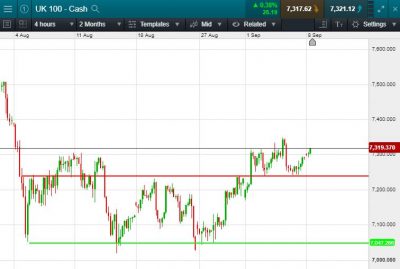 FTSE called to open +35 Points at 7317 this morning; Asia stocks gained overnight as further hopes of increased stimulus for the markets to slow growth in the world major economies.  Risk sentiment was also fortified as Federal Reserve Board Chairman Jerome Powell said on Friday that the central bank would continue to act “as appropriate” to sustain economic expansion.  Friday saw further gains being tempered by lacklustre jobs data which slowed more than expected in August.  Although the Dow did close Fridays trading session in the green and a green sweep in Asia to start the week. Oil has bounced from $60 a barrel to $62.5 over the weekend, could this signify a bounce in the UK listed oilies?  The biggest loser is gold, risk on sentiment has had impact and gold dropped from $1550 to $1505.

Associated British Foods maintained its guidance, forecasting good profit performances at its Primark fashion chain and grocery business would offset a decline in its sugar operations. Sales at Primark for FY 2019 +4% ahead of last year, driven by increased selling space partially offset by a 2% decline in like-for-like sales.

Lloyds announced this morning extra provisions for PPI claims of £1.2-1.8bn and will suspend the rest of its 2019 buyback programme.