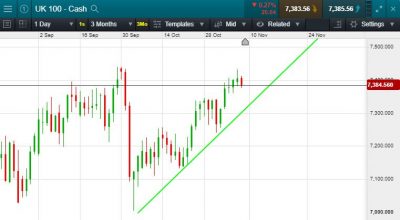 FTSE 100 Called to open -20 points at 7388; This comes on the back of The U.S. and China agreeing to rolling back tariffs in phases would be part of any deal if they can reach an agreement. Meantime, China’s exports and imports both dropped less than expected last month.  Donald Trump also said that he had no intention of hitting the EU with any car tariffs.  The US saw a green sweep accross equity markets, the Dow Jones closing +182 points, the S&P adding 0.27% and the Nasdaq +0.28%.  In Asia it was a more mixed session, the Nikkei closed positive (+0.26%) whilst the Hang Seng closed -0.82% (Concerns in Hong Kong may be that death of Hong Kong student may inflame weekend protests).  Oil held above $62 per barrel overnight, whilst gold slipped further, breaking down to $1469.

Beazley released their trading statement this morning delivering a 12% increase in gross premiums; 13% increased in investments and cash; YTD investment return increased from 0.5% to 4% YoY; whilst rate increase rose from 3% to 6% YoY.

Royal Mail seeks injunction due to potential irregularities in CWU ballot, which would render it unlawful in an attempt to block employee strike during December.