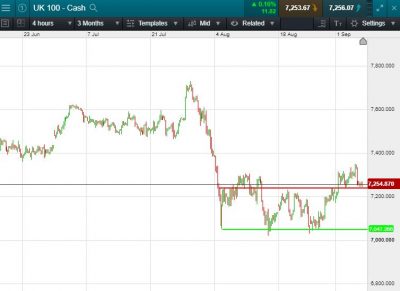 FTSE 100 called to open -10 points at 7261; This follows news that opposition parties plan to call a general election on October 29th in a move that looks to unsettle and out manoeuvre Boris Johnson. Overnight trading in Asia saw a positive trading session on renewed hopes of progress with Chinese-US trade talks (now scheduled at a high level for early October). Angela Merkel also waded in on the matter saying she hopes these trade issues will be over soon. The Dow Jones continued to motor on, now adding just short of 2000 points in the last month! In focus today will be Non-farm payrolls where a slow down in US job growth is expected, but enough to support the economy. Oil pulled back from its highs of yesterday following a bigger than expected draw-down, but still settled above $61 per barrel, gold was yesterdays most noticeable faller, currently settled at $1515.

Berkeley Group anticipates net cash at half year to be at a similar level to full year position of £975m. First 4 months of this financial year, market conditions in London and South East have remained robust. Over six years to 30 April 2025, sees profit ranging between £500-700m.