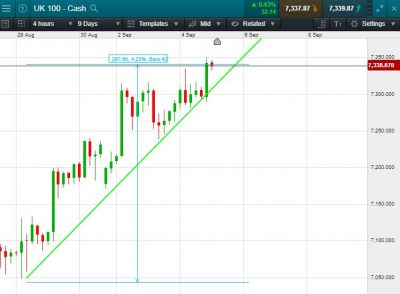 FTSE 100 called to open +30 points (and paid a 12 point dividend) at 7340; This comes on the back of UK lawmakers rejecting Boris Johnson’s call for an early general election on October 15th. Having earlier passed a bill to block a no deal Brexit,  this paired with the rally seen on the back of fresh talks of high level trade negotiations to take place in early October have seen global markets pick up where they left off yesterday and the latter part of last week.  The Dow Jones has now added 1,600 points since August 5th, with futures showing an opening in the green in excess of 200 points.  The Nikkei also closed +2.2% on the day.  Having rallied almost 4 % yesterday, oil has settled at $61 per barrel and gold currently sits at $1544.

BooHoo announced a positive profit warning for H1 2019 trading, as it was ahead of expectations and now expected its full-year revenue to rise between +33%-38%. First half results are due 25th September.

Go Ahead Group results slightly ahead of expectations. Operating profit +4.7% and maintained full year dividend of 102.08p. Made good progress against all three strategic pillars: protect and grow the core; win new business and rail contracts; develop for the future of transport.

Melrose announced trading in line with expectations but warned that weakness in the global automotive market would persist in the second half of the year.

Redrow announced full year pre-tax profit +7%, revenue +10% and proposed a final dividend of 20.5p per share. Cautious about post-brexit future and also eventual impact of impending changes to help to buy scheme. Expects 2020 to be another successful year for the group.

William Hill announces that Philip Bowcock will step down as CEO and director of the company with effect from 30th Sept 2019. Ulrik Bengtsson (current William Hill chief digital officer) has been appointed as his replacement.