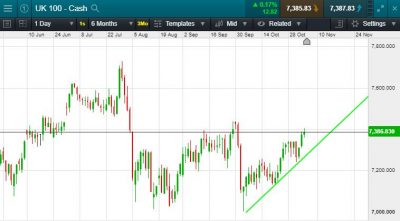 FTSE 100 called to open +20 points at 7390; overnight sessions in both Asia stocks and U.S. saw gains after further records were reached on Wall Street, spurred by signs the U.S. and China are inching toward a trade deal. The Dow Jones closed at 27,462, +114 points (a new record close) with futures currently sitting at in excess of 27,500. The S&P also tumbled previous records to close at 3,078, +11 points; and to complete the set the Nasdaq closed at record highs also, 8,433, +46 points. The Nikkei closed gaining just shy of 2% +435 points! The Hang Seng also added +145 points. In focus today will be global equities, could this be the foothold for a return to record highs this side of the pond? Oil has maintained its $62 per barrel level whilst gold has pulled back slightly ($1507) to add further fuel to the risk on appetite that exists.

AB Foods reported a +2% rise in annual earnings with growth at its Primark and grocery businesses  more than offset lower sugar profits. EPS of 137.5p, exceeding 17/18’s 134.9p payment. Well positioned for further progress in 2020 with the continued expansion of Primark, a material improvement in sugar profit and strong profit growth in grocery.

Topps Tiles group CEO Matt Williams has decided to step down from the board with effect from 29th November 2019. Rob Parker current CFO will be appointed as his replacement.