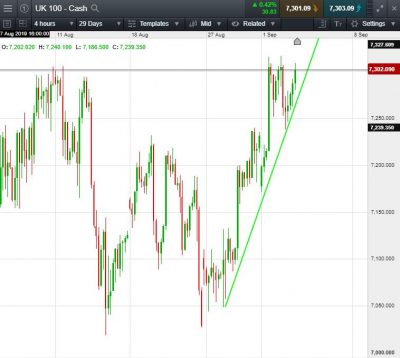 FTSE 100 called to open +40 points at 7310; On the back of Chinese PMI data hitting 3 month highs, seeing Hang Seng futures spiking as much as 3%, this in turn has added positive sentiment throughout global markets, the German Dax is positive by 1% in early trading, FTSE futures half a percent higher, Dow Jones futures ALREADY 212 points higher, now showing a gain of 1220 points since the beginning of August. Oil recovered back the $59 per barrel level overnight, having gone as low as $58.5, whilst gold slipped back slightly to settle at $1537 having yesterday hit $1550.

Dunelm reported H1 2019 profits +23%, but said it would maintain a cautious stance about its full-year outlook due to uncertainty over Britain’s exit from the European Union. They’ve benefited from the early wet-summer weather which drove Britons to its out-of-town shops coupled with an increase in online spending.

Just Group reported H1 2019 profits -27%, due to a drop in new business profit. New rules from Britain’s Prudential Regulation Authority requiring more capital behind lifetime mortgages, one of its key products has impacted its business. Currently pays no dividend, and this will remain unchanged.

RBS announces further PPI charges, as claims were significantly higher than expected during August (leading to the PPI deadline). Consequently an extra £600-£900m will be needed to be set aside which will impact its Q3 2019 results.