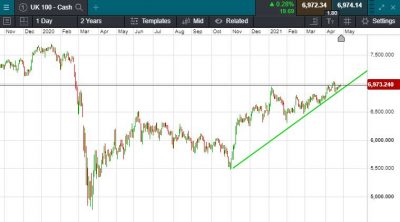 BT are in talks to sell some or all of their television arm BT Sport amid interest from Dazn, Amazon and Walt Disney.

Natwest returned to profit in Q1 2021 after joining rivals in releasing some of the cash it had set aside to cover expected bad loans due to the pandemic. They reported a pre-tax profit of £946m, ahead of average analyst forecasts of £536m (2020: £519m profit). Their profits were boosted by a net impairment release of £102m, where analysts had forecast an extra charge of £251m.

WH Smith have warned of the possible risk of breaching its covenant tests in 2022 after they slumped to a H1 loss and launched a potential £325m bonds offering as the retailer navigates the COVID-19 crisis.