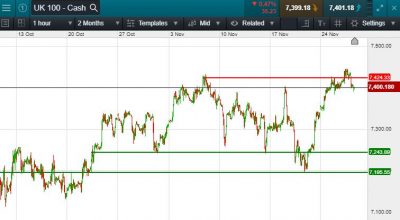 UK 100 called to open -25 points at 7400; This is on the back of a rocky trading session in Asia where we saw tensions boil over in Hong Kong, leading to China warning the US over retaliatory measures after Donald Trump signed a bill backing Hong Kong protesters. The president signalled concerns the new law risks interfering with his authority to carry out foreign policy. This saw the Nikkei close -53 points, while the Hang Seng also closed lower -51 points. However, it must be noted that these movements are not as knee jerk as previously seen, is this a sign that positive investor sentiment is outweighing geopolitical events? It was a more positive story also in US yesterday with the Dow closing +100 points to close at record highs, the S&P +13 points, also closing at record highs & the Nasdaq +57 to complete a hat-trick of record highs! Crude oil dropped slightly below $64 a barrel but held strong at $63.89, while gold traders will have been pleased to see the traditional safe haven pull off recent lows to trade at $1457.

Amigo Holdings today said they had seen continued demand for our guarantor loan product with solid growth in customer numbers. As well as making encouraging progress as they roll out the operational and strategic initiatives outlined in August. While it will take some time to see the full benefits, they are pleased with the positive start we have made.  Customer numbers +17.9%; Net Loan Book +8.8%; Revenue +11.8%; Profit after tax -1.9%; Adj Profit after tax -24.2%; Basic EPS -9.3%; Interim dividend +65.8%.

Go-Ahead Group delivered revenue growth of 2.5%; Passenger journeys +0.5%.  David Brown CEO said In regional bus, we continue to see growth in passenger journeys and our yield enhancement plans are beginning to deliver improvements. The integration of our new bus company in Manchester, combined with cost pressures in some areas of the business, has slightly lowered our expectations for this division’s financial performance for the full year

Ocado Group have announced today the location of a sixth Customer Fulfilment Centre (“CFC”) in the UK to support the growth plans of Ocado Retail, allowing it to bring the market-leading Ocado customer experience to even more customers in the UK.

Virgin Money said In the first year of our newly combined business, we have delivered a good operating performance in challenging conditions and made great progress on the integration and rebrand to Virgin Money.  Statutory loss after tax £194m; Underlying profit before tax £539m;