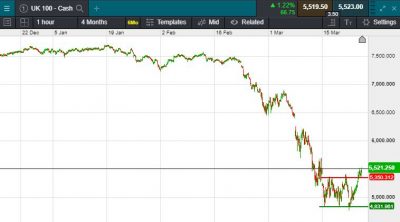 UK 100 called to open +80 points at 5526.  Stocks in Asia headed for their biggest daily gain since 2008, seeing the Nikkei rise 8% to 19,546, the Hang Seng rise 3.3% to 23,424 and the Chinese CSI rising by 2.69%. emulating the rebound on Wall Street Tuesday, and the dollar retreated further as investors took in strengthening U.S. stimulus measures.  The Trump administration struck a deal with Senate Democrats and Republicans on an historic rescue package that tees up almost $2 trillion in spending and tax breaks to bolster the hobbled U.S. economy and fund a nationwide effort to stem the coronavirus, according to two people familiar with the plan.  — Oil rode a rally driven by optimism over U.S. stimulus spending into a third day, but a vicious price war that shows no signs of abating continued to hang over the market. Futures in New York extended their gain this week to more than 10% .

Bellway report interim results with revenue +3.6%, gross profit -5.6% and the interim dividend for 2020 will be postponed until later in the year when there is more certainity with regards to economic outlook. COVID-19 will result in substantial disruption to the business.

Meggitt announce that Sir Nigel Rudd will stay on as Chairman until further notice. Although he still intends to retire in due course, the board believes that there is significant benefit in continuity at this time.

United Utilities report that current trading is in line with group’s expectations for the year ending 31st March 2020.