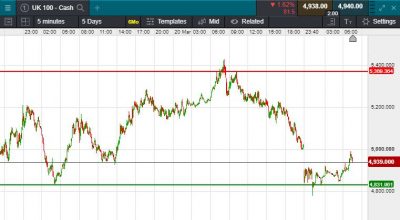 FTSE 100 called to open -250 points at 4940.  U.S. and European equity futures tumbled along with equity futures after a surge in the global death toll from the coronavirus and a failure by Congress to agree on an aid plan. S&P 500 futures dropped 5% and hit limit down early on, though came off its lows.  Gold dropped again as investors buckled in for yet another volatile week, with the dollar extending its record-setting ascent after the global death toll from the pandemic surged and governments battled to address the mounting crisis with ever-more Draconian measures. The traditional haven has been struggling for grip amid the turmoil, with many investors.  Oil dropped toward the lowest level since 2003 as prospects for a deal between OPEC and Texas to limit production appeared to fade, while a U.S. coronavirus rescue package ran into political delays. Futures in London fell around 3% to near $26 a barrel, while West Texas Intermediate rose after the April contract expired Friday.

Aggreko have announced that given the continued uncertainty, they do not believe it is possible to retain the Group’s 2020 guidance as communicated at their FY results on 3rd March.

Associated British Foods state that its Primark stores closure represents a loss of £650m of net sales per month.

First Group announce due to COVID-19 and the changes it has had on its business, that they are no longer able to provide guidance on the outturn for the remainder of the financial year.

Pearson have decided to pause their share buy-back programme in the face of COVID-19 uncertainty.