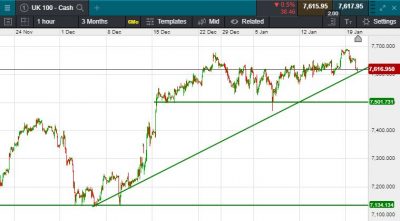 FTSE 100 called to open -40 points at 7611; Stocks and U.S. futures dropped in Asian trading Tuesday, with Hong Kong equities falling more than 2%. The yen and U.S. Treasuries advanced as a broad risk-off move developed, with gold edging higher. China’s yuan weakened by the most in three months. Market participants attributed the moves to worries over China’s coronavirus. The Nikkei fell 218 points to settle at 23,864, while the Hang Seng closed at 27,994 (-801 points). US markets were closed yesterday due to bank holiday for Martin Luther King day.  Crude oil also saw a slight pullback to trade at $65 at time of writing, while as previously mentioned gold was the biggest gainer, trading at $1564.

BHP Group maintained its forecasts for FY iron ore and thermal coal output, despite production of the latter being hit by the Australian bushfires.

BP announce that their CFO Brian Gilvary is to retire on 30th June 2020 and be succeeded by Murray Auchincloss.

Dixons Carphone maintains guidance after flat Christmas, with sales growth in electricals offset by falling mobile phone sales. Like-for-like sales +2% while sales in UK & Ireland mobile business on the same basis fell 9%. The group said it was on track to meet its targets, with no change to the financial guidance.

EasyJet state that their H1 performance would improve from last year as robust demand for flights helped it upgrade its forecast for revenue per seat, to increase by mid to high single digits, ahead of market consensus. H1 pretax loss will narrow from last year, on strong demand for travel during its quieter winter period.