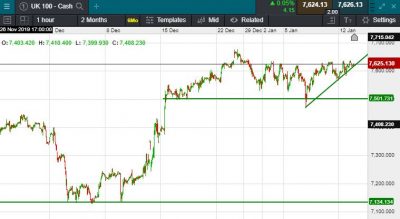 FTSE called to open +7 points at 7624; Trading in Asia and the US was mixed overnight on the back of the previous three day rally in the run-up to the US and China edging ever closer to signing a trade deal.  Stocks pared earlier gains as data showed China’s trade with the U.S. slumped last year, as the trade war hit relations between the two biggest economies.  In the U.S we saw the Dow Jones closed towards all time highs once more, at 28,907 (+83 points).  The S&P also closed towards record high at 3,288 (+22 points).  The Nasdaq completed the U.S march towards all time highs, closing at 9,273 (+95 points).  In Asia it was a similar story seeing the Nikkei marching towards its own record high, closing above 24,000 (24,025, +174 points).  However it was a more negative trading session in Hong Kong, seeing the Hang Seng closing at 28,867 (-87 points).  Gold prices slumped overnight as safe havens took a hit, ahead of the signing of the U.S-Sino trade agreement, trading at $1540 at time of writing this.  Crude oil also pulled back, now once again sitting below $65 per barrel.

Games Workshop reported record sales and profit levels for the period.  Sales for December were in line with expectations. A dividend of 45p per share was also announced today,in line with the Company’s policy of distributing truly surplus cash

Page Group delivered Q4 results today, delivering fourth quarter gross profit of £205.6m, a decline of -0.4% in constant currencies and -2.6% in reported rates. In constant currencies, Michael Page was down -0.1%, with Page Personnel declining -1.0% in the quarter.

Taylor Wimpey today announced that results would be in line with expectations, despite an uncertain political and economic backdrop for 2019.  They also increased home completions by c.5% in the year. Profit margin 19.6%; Net operating assets of 31%. 2020 outlook remains strong, weighted more to H2.

888 Holdings announces that Aviad Kobrine will step down from his role as chief financial officer during 2020.