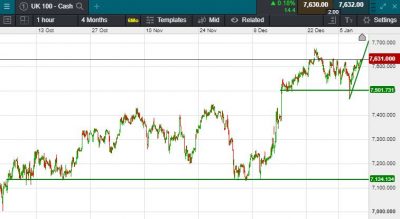 FTSE called up 30 points, at 7631. Asia was mixed on Friday ahead of Non-Farm Friday. US and European equity futures rose whilst gains in Hong Kong and China fizzled out. The US continued its good start to the year with the S&P hitting fresh record highs. This on the back of Middle East tensions subsiding, with the US and Ian stepping back from the brink of war. Also adding to sentiment were jobless claims, which fell more than expected adding to signs of economic strength ahead of payrolls. The positive sentiment continues with China’s vice premier visiting Washington next week to sign the first phase of the deal between US and China. West Texas dipped 0.2% to $59.50 whilst Gold slid 0.3% to $1547.5 per ounce.

Ryanair raises FY guidance to new range of 950-1,050m euros due to stronger Christmas period traffic and higher customer yields. Forward bookings Jan-Apr are +1% ahead of this time last year. Their Austrian subsidiary Lauda’s losses have risen from 80m to 90m euros due to price wars.

Superdry issues a profit warning after poor Christmas trading on older product. Underlying pre tax profit for the year would be in the £0-10m range (Verses analysts average forecasts of £40.5m).