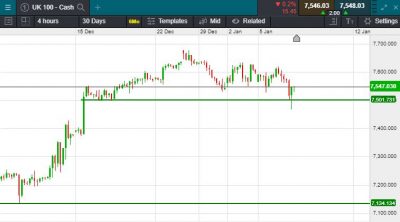 UK 100 called to open -30 points at 7547;  Calls for a negative open come as Iran sought to calm tensions after earlier roiling markets by firing rockets at two Iraqi air bases housing U.S. Troops. Tehran “concluded proportionate measures” and isn’t seeking an escalation, though it reserves the right to defend itself, Foreign Minister Javad Zarif tweeted. Donald Trump sounded unperturbed. “All is Well!” he tweeted. “So far, so good!”.  The Nikkei closed down 370 points at 23,204, the Hang Seng also saw a  three digit fall, giving up 247 points, closing at 28,067.  With global tensions weighing on markets in the US, the Dow Jones closed at 28,583 (-119 points), the S&P closing at 3,237 (-9 points) and completing an all red day the Nasdaq closed at 9,068 (-3 points). Crude oil came off its highs after Iran assured that its strike on U.S. facilities in Iraq Wednesday didn’t mean it was seeking a war, trading still higher than yesterday however at $70 per barrel at time of writing.  Gold surged above $1,600 an ounce for the first time in more than six years.

Sainsbury’s reports a small fall in underlying sales for its Christmas period quarter, hurt by a weakening performance in general merchandise (-3.9%). Like for like sales fell 0.7% compared to a Q2 fall of 0.2%. Online sales did grow by 5%, and clothing sales were up 4.4%.

Greggs updated the markets with a trading statement which headlined with total sales up 13.5% up from 7.2% a year earlier. CEO Roger Whiteside, points out that the huge popularity of the Vegan sausage roll and the roll out of the new ‘Vegan Steak Bake’, will help it evolve its range to suit a range of dietary choices. Finished 2019 in a very strong financial position, despite investments and the return of a special dividend in Oct 19’(£35m).

Anglo American say they are in advanced talks to buy Sirius Minerals for 5.5p per share ($506.7m), valuing the company at about £386m.