The UK market action for the week has been dominated by Brexit-related headlines. The UK Supreme Court nullified the prorogation order and paved the way for the UK Parliament to resume sitting.

The week started with the troubling news of the collapse of Thomas Cook, the world’s oldest travelling agency. This news, coupled with a Monday sell-off in the shares of Rolls Royce, put the FTSE 100 on a downward spiral at the start of the week. However, the market’s response to the UK Supreme Court turned things around. The FTSE 100 is now up on the week by 128 points and could push higher if bullish news continues.

The outlook for the FTSE100 remains unchanged, as price candles have not recorded any big moves since the last analysis piece to negate previous outlook. In the long term, price continues to remain within the borders of the up channel, even as price is forming higher lows and lower highs. The presence of lower highs on the monthly chart indicates that the upside is limited and the uptrend may be dying out. 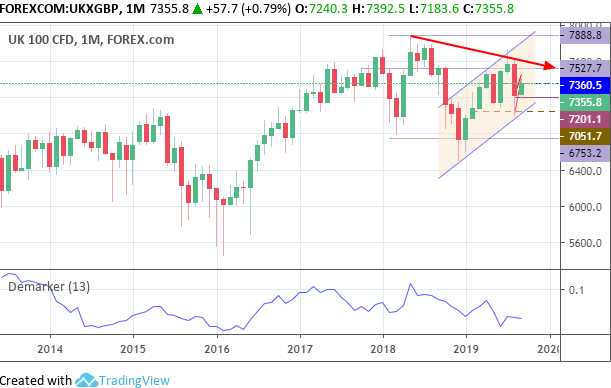 On stepping down to the weekly chart to get the medium-term perspective of the FTSE100 index, we can see that the weekly candle has pulled back up in a return move to test the lower border of the rising wedge from which it broke out. Such moves after a pattern breakout are not abnormal, especially if the move occurred on light volume.

This return move is retesting the 7360.5 medium-term resistance (highs of the weeks ended on March 18, May 13 and September 20). 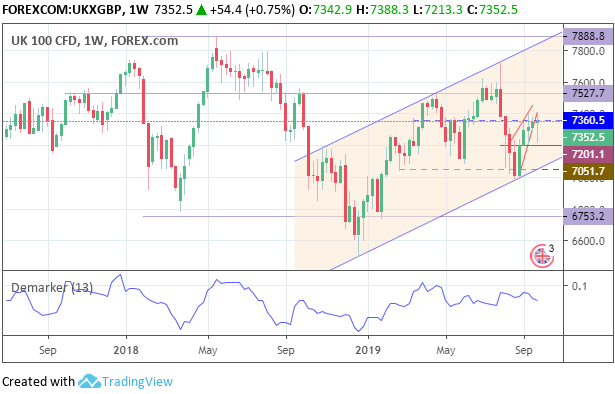 Within the context of the weekly chart, bulls would still be looking for a break above 7360.5 to lead the way for a push towards 7525.7 (Nov 2017 and April 2019 highs). Further upside above 7527.7 would complete the breakout from the symmetrical triangle, which targets the upper channel border at the 7888.3 price level as the next target. This would complete a bullish continuation of the symmetrical triangle, in keeping with a continuation of the uptrend of the FTSE100 from 2016.