Home / Blog / blog / Could The Mortgages Be Fooling You? – 30th August
Trading Opportunities

Could The Mortgages Be Fooling You? – 30th August

Could The Mortgages Be Fooling You?

Consumer spending is generally expected to be an outcome of consumer confidence. British Retail Consortium’s July report followed by poor results posted by retail segment were well understood on the back of consumer confidence indices which were low probably due to hard Brexit fears along with global slowdown. In recent times these fears have only grown stronger. The crown did accept the Parliament suspension giving away any no-deal blockade and Trump continues to uphold his volatility. Only thing stable for now, as we see from Bank of England’s Money & Credit statistics report, are mortgage growth rates. The July net mortgage was at ₤4.6b, up 3.2% on a 12 month basis, higher in part due to lower repayments. 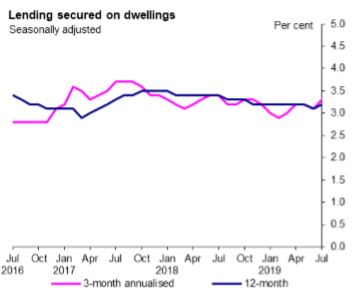 Approvals for house purchase, as documented in the BoE report, grew to 67,300 approved applications at ₤13.1b, highest since March 2016. 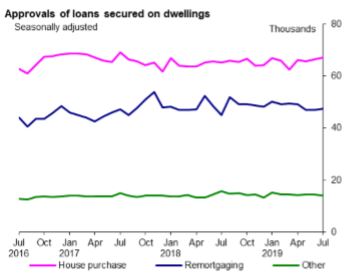 Though the consumer credit is still growing, the pace of growth has almost halved from around 10% to 5% in past 3 years, yet we see strong growth in mortgages. 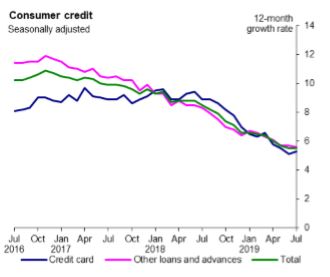 Loan approvals, as seen in Nationwide’s mortgage approvals last week, may give a naive optimistic view of the market. Consumers are not spending enough from the retail industry shutting down stores, yet home loan approvals are on a record high! Will it be a cause for alarm for the prudential regulator. Perhaps not, and for two reasons. One, though the number is high, it is still in a tight range and may not warrant a reason for worry. Two, it doesn’t consider hard-Brexit as a possible event to take an action on until it happens.

In its last MPC, the committee said that the action will depend upon the kind of withdrawal reached. Also hard Brexit continues to remain as a scenario more than a possibility for the Office of Budget Responsibility.

What could explain these high number of approvals? Is it that the lenders won’t revise their LTVs and credit assessment policy based on what lies ahead. Yet more consumers pile up for loans not knowing whether they will be able to secure one post Brexit? This still doesn’t explain the behavior where consumer holds off the purchase in the retail market yet tries to secure a home loan. This could perhaps be one of those behavioral decisions where the Consumer is mostly not an ‘Econ’. Nevertheless, euphoria out of mortgage approval numbers is perhaps best avoided.