Tech giant Apple received a boost this week, as the US president delayed tariffs on $300 billion worth of Chinese goods, including laptops and mobile phones. Trump’s threat to impose the tariff from the 1 September caused Apple’s share price to fall by 6% in the first two trading days in August, amidst worries about the impact on the latest iPhone launch at the end of September. A 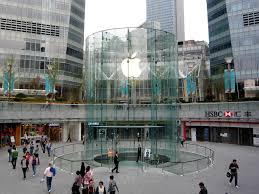 pple’s headline sellers, including iPhones, are all produced in China, and the company had already warned that the implementation of the tariff would affect all of its major products. The announcement that the tariff would be delayed until mid-December caused Apple shares to spike by almost 5%, taking prices to 202.75 USD at the time of writing.

So, is now the time to buy, sell or hold Apple shares? There’s no doubt that Apple remains popular – some analysts view it as one that is likely to pay dividends to investors for a lifetime. However, the trade tariff is still expected to be implemented in mid-December and, while that won’t affect the next iPhone launch or festive sales this year, Apple will still have to choose between raising prices or absorbing the extra costs. Some analysts believe that the firm is still too reliant on the iPhone, despite efforts to diversify into services earlier this year. The ongoing dispute between the tech giant and streaming service, Spotify, is also weighing on some minds, with the possibility that Apple may face a record $6 billion fine still on the horizon. However, the general consensus from analysts seems to be that these are short-term setbacks.

Apple have not been the only winner from the trade tariff delay announcement – beleaguered clothing retailer, Gap, also saw a sharp surge in share value following the announcement. Its shares also rose 5%, reaching a high of $17.95 on Tuesday. Trade tensions have had considerable impact on the retailer as it is reliant on importing materials from China, and its YTD share price performance has been poor so far, falling by 30.32%. Trade sanctions are not Gap’s only issue, so while this temporary reprieve is good news in the short-term, its long-term impact may be limited. Changing retail tastes and the shift towards e-commerce has all had a negative effect on Gap’s sales over the past year. The possibility of a thaw in trade wars with China has led some analysts to upgrade the retailer’s shares to a neutral rating, but many remain at sell.

The delay in imposing the Chinese tariffs had a positive effect on the US stock market as a whole, with the Dow Jones and the S & P 500 both rising around 1.5%. However, analysts still fear that the world economy could tip into recession if the US president follows through on his threat to eventually raise tariffs on Chinese imports to 25%.